Home
BACK
Veteran and former 82nd Airborne Paratrooper, Ron Taylor, takes the Traveling AccuFit on his first hunt ever in hopes of lowering the coyote population around his home town in Lincoln, NE. Being in the military for several years, Ron is no stranger when it comes to firearms.

"I've shot a majority of the standard military issued weapons including AR-15 rifles and M60 machine guns, but not as many bolt action rifles," says Ron.

"Immediately upon opening the case, I was a fan. I spent the first hour or so reading the manual to educate myself on the different parts, attachments, and how to properly adjust the length of pull and comb height to fit me," says Ron.

Once Ron & his hunting mentor Eric had the rifle fitted, they headed to the range to make sure the rifle was still zeroed. After a few well-placed shots and a couple of turret adjustments, Ron was ready to take on his first coyote hunt.

"Things were a little bit slower than I had hoped, but it was a fantastic experience! I'm competitive by nature, and the challenge of hunting a predator sucked me in. We ended up not getting a coyote, but a few days later, I headed back out with Eric and was able to complete my first harvest on a young whitetail buck."

"For me, the Savage Model 110 is a no brainer. Apart from being high-quality and extremely accurate, the ability to adjust the rifle for multiple hunters during the same day or weekend is the main selling point for me. I have three kids (years 10,8 & 6), and this is the model of rifle I want our family to have," says Ron. 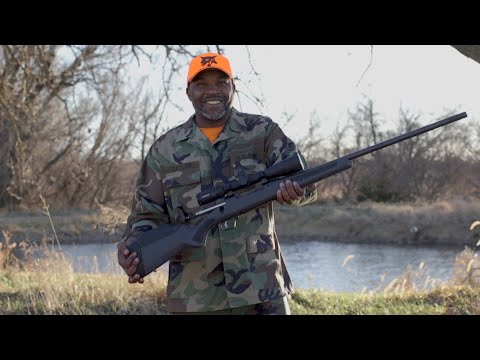