Home
BACK
Two brothers, Austin Nimmo (27) & Garrett Nimmo (30), make a hail mary play as they pursue a mature bull elk on public land with an over the counter tag that they bought 36 hours before the hunt.

“As anyone can relate, hunting doesn’t always go as planned,” said Garrett. “We originally planned on hunting a certain area that we had been scouting all summer, but due to a lack of time and special filming permission, we had to move to plan B, which ended up being an exciting twist on the story anyway.”

As the brothers pulled into camp around 2 am, the day after the season opened, they joked about “hoping that they could find a place to park.” Little did they know, 40-50 trucks would be in camp upon their arrival.

“We expected this to be a tough hunt, and planned on other hunters being in the area, but didn’t expect to see the sheer volume that we did,” said Austin. “It was pretty clear upon arriving that if we wanted a chance to harvest a mature bull, it would be done miles away from everyone else. So, we cinched up our packs and began hiking to a secluded pocket that we knew about.”

“After getting to this pocket, we began glassing the neighboring ridges and almost immediately began picking out elk. Some younger bulls, some four-year-old bulls, and one king of the mountain. It was obvious after glassing him up that this was the bull we had been holding out for,” said Austin.

The brothers made an aggressive stalk past a herd of elk and found themselves in position. Austin quickly adjusted the bi-pods, magnification, and made a well placed shot to the adjacent ridge dropping the bull in his tracks at 553 yards.

“We harvested a mature bull, on public land, with a general tag, and we had a lot to be happy about,” said Austin. “Being able to adjust the length of pull and comb height gave me the confidence that I needed to be able to make this shot. I adjusted the fit to match the 7mm that I normally shoot, and I was 100% certain that bull was in trouble.”

“Savage Rifles are known for their accuracy, and this Model 110 AccuFit didn’t disappoint. It performed exactly how I needed it to, flawlessly,” said Austin. 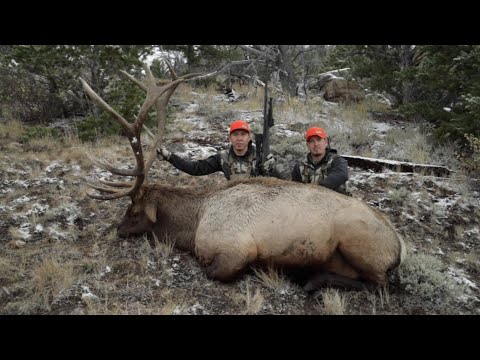