Home
BACK
Stephanie Dinger, a banker, wife, mother, and hunter - breaks away from a busy schedule to chase rutting whitetail with her husband and father-in-law in her home state of Nebraska.

“Hunting for us is a family event. But, it wasn’t always this way,” says Stephanie. “I grew up fishing here and there but never hunting because I didn’t have anyone to take me and I didn’t even know that I was interested until 5 years ago when my husband, Eric, asked me to go with him for the first time. He kept going on and on about this fever, this excitement, and ultimately this love and passion that you develop for nature through the process of hunting. Flash forward a number of seasons later, I couldn’t imagine my life without hunting.”

As the Traveling AccuFit showed up the day before the hunt, Eric & Stephanie adjust the rifle to fit Stephanie. “We used a leatherman on the back of our truck to remove the two back screws giving us the ability to adjust the comb height and length of pull. After we got the rifle fit for me, It was really comfortable and I felt confident that this rifle would serve me well in the field,” says Stephanie.

“Right out of the gate, I had my sights on finding a big buck. There was plenty of doe movement but the only buck we saw was a little spike with one antler. I tried not letting the lack of bucks get me discouraged so the next day, we went to a different spot that seemed a little more promising. But, it was the same story, a lot of does and no bucks.”

“After not seeing any bucks, I decided that I would harvest a doe, and the only doe that presented an opportunity was a mother doe with her two fawns. Being a mother myself, I’m a softie and there was no way I could have taken that doe when she was with her fawns. So, it was on to Plan C,” says Stephanie.

Later that afternoon, the Dinger family made their way to some thick brush in hopes of bumping a mature buck out into the open for Stephanie. As Eric & his father made their way through the brush, Stephanie heard a gunshot and knew that it had to have been Eric harvesting something.

Eager to see what happened, Stephanie rushed over to meet Eric and celebrate his harvest as the light faded from evening to dusk. “Even though we set out with me being the shooter, I was just excited that one of us got something. We are a family, we got something together, we were successful on this hunt and that’s what it’s all about,” - says Stephanie. 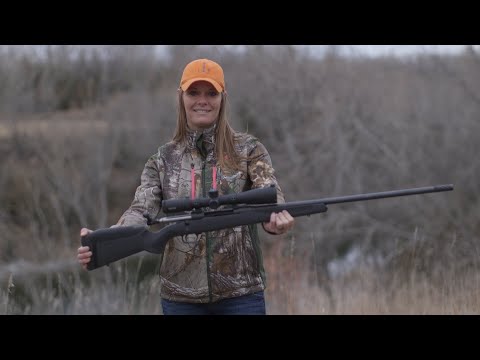