But, the weather had a different plan. As temperatures soared, and the frozen ground began to thaw, the Breaks’ notorious rugged ridges and steep canyons quickly became dangerous to hike as the hard ground abruptly turned into greasy gumbo.

Being forced to back out, Iris and her father Andrew decided to make a hail marry play in hopes of filling Iris’ doe mule deer tag. Iris, having harvested five bucks during residence in Montana, was up for the task and felt confident in her abilities if the muddy, snow-drifted roads would allow them access.

“We got up early and hustled, trying to beat the warming sun. Upon arrival, Iris deployed her accumulated skills, spotting a doe, setting up in a spot where she’d have a shot if the deer stopped, and then making a clutch shot when the doe gave her a brief broadside. I couldn’t have been more proud,” said Andrew.

“What I liked about the Traveling AccuFit was that we were able to adjust the length of pull and comb height to fit me but also the fact that we were able to confidently pursue a cow elk and a mule deer doe in the same hunt using the same caliber. I really liked the .280 Ackley Improved as well,” says Iris. 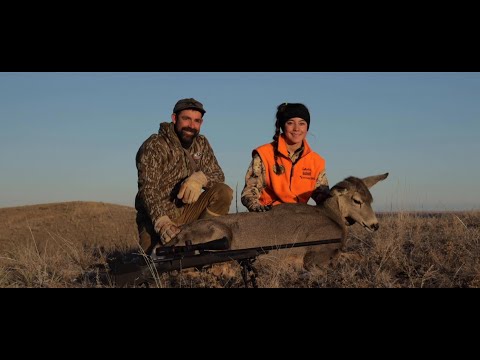