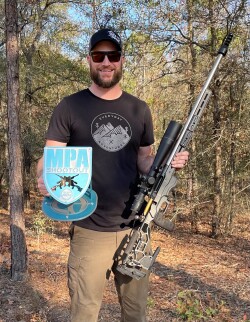 January 27, 2022 - WESTFIELD, Massachusetts – Savage Arms is pleased to announce that Matt Alwine has joined Team Savage. Alwine will be competing in the PRS Series production division with a Savage 110 Elite Precision.

“We are thrilled to have someone of Matt’s caliber on our team,” said Beth Shimanski, Director of Marketing at Savage Arms, “and we are excited for what’s to come in 2022 for him! The 110 Elite Precision is the perfect platform for this division and we wish Matt the best of luck this upcoming season.”

Alwine’s winning streak for 2022 is off to a solid start; he won the production division in the first PRS pro series match of the 2022 season—the MPA fall shootout.