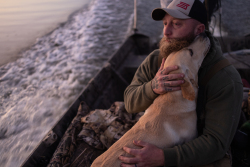 November 10, 2022 - WESTFIELD, Massachusetts - Savage Arms announces the release of its latest Savage Journeys episode: Horicon Marsh Veterans Hunt. This small town event has a big impact and is held each year just north of Milwaukee, Wisc. in the famed Horicon Marsh. Savage Journeys and Savage Arms Ambassador and U.S. Marine Corp Veteran Ryan Baudhuin detail the event and introduce us to so many veterans who continue to use this hunt for healing, comradery, and way to get outside and hunt.

The Horicon Marsh Veterans Hunt has been held each year for more than a decade and relies on an ever-growing network of volunteers to deliver a first-rate experience and keep up with the growth. What started as a way to bring less than ten veterans into the field has blossomed into an annual, wildly popular hunt with a waiting list to attend. Its popularity is only overshadowed by the difference it makes in first-time attendees and yearly regulars every October. This year’s hunt featured over 50 volunteers, dozens of sponsors, 55 volunteer guides, more than three dozen dogs and over 80 veteran hunters.

“This event has saved lives,” said Horicon Marsh Veterans Hunt Treasurer Andy Johnson. “It definitely has saved veterans’ lives. Of course, when this event first came up we never had any ideas or thoughts that that’s what it was, we were just taking people out duck hunting. It has turned into so much more than that. It’s gaining traction and we’re getting people from all over who are wanting to be involved, who want to help and help for the right reasons. They want to help vets and try to give back for what we feel is owed to them.”

“2015 was my first year,” said U.S. Marine Corps Veteran Matt Owens. “I had never hunted ducks before. I instantly fell in love with it and couldn’t wait to come back. For 51 weeks a year I pretty much wait for this weekend. It’s all I can think about.”

Baudhuin knows firsthand the impact this event can have. After a combat tour in Iraq, Baudhuin was struggling like so many other veterans. He was battling PTSD, mental health, substance abuse, loss and grief. His life was spiraling out of control in 2011 when he was invited to the Horicon Marsh Veterans Hunt. He credits it with saving his life and used it to propel him into a career in the outdoor industry and come full circle by giving fellow veterans a chance to hunt. “Having been through the struggles myself and seeing what hunting and being outdoors can do for you, I want to give the gift of outdoors as it was given to me,” said Baudhuin. Baudhuin now puts on his own events for veterans through his non-profit, High Point Adventures, hunting everything from bear to ducks to exotic game in the pursuit of healing in the outdoors. “You get to these events and you will see guys who are struggling. The event is not the hunt-that’s the setting. The event is the comradery between the other veterans. Even just the relationships and the interactions between the volunteers and guides and the authenticity of that-it’s real. It’s community. And you build a network here.”

“Using hunting and using the outdoors as a healing tool for PTSD and mental health is just one tool in the toolbox that we can give these guys,” said Baudhuin. “I think the biggest thing they find out there is peace and tranquility, as well as the comradery.”