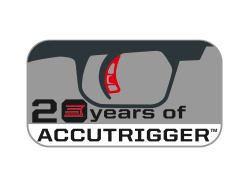 “Introduced in 2003, the AccuTrigger was a game changing innovation not only for Savage, but also for the entire firearms industry,” said Beth Shimanski, Director of Marketing at Savage Arms. “The AccuTrigger was developed to be the safest and most reliable trigger on the market with a focus on performance and above all, accuracy. It’s impressive that 20 years later, the Savage AccuTrigger remains the best factory trigger there is, making it the ultimate tool for all hunters and shooters”.

Utilizing revolutionary and patented technology designed by leading firearms engineers, the AccuTrigger system was designed to eliminate trigger creep while being user-adjustable and completely safe. With a trigger pull between 1.5 pounds and 6 pounds, the AccuTrigger continues to meet all the above requirements and more.

“The AccuTrigger spawned a wave of innovation in Savage that continues today and is stronger than ever,” said Al Kasper, President and CEO of Savage Arms. “With new innovations such as AccuStock and AccuFit, a long line of new product offerings, and much more coming down the pike, the AccuTrigger was just the tip of the iceberg of what has come from Savage in the past 20 years and what will continue to come moving forward.”

From plinking, to long range precision and all hunting scenarios-Savage shooters have the tools to test their abilities and hit their marks. On this 20th Anniversary, AccuTrigger stands as a symbol of the spirit of innovation at a company that accepts no limitations-not on accessibility, not on performance, and certainly not on safety.

For more assets and information on the Savage AccuTrigger and all Savage product offerings, visit savagearms.com.